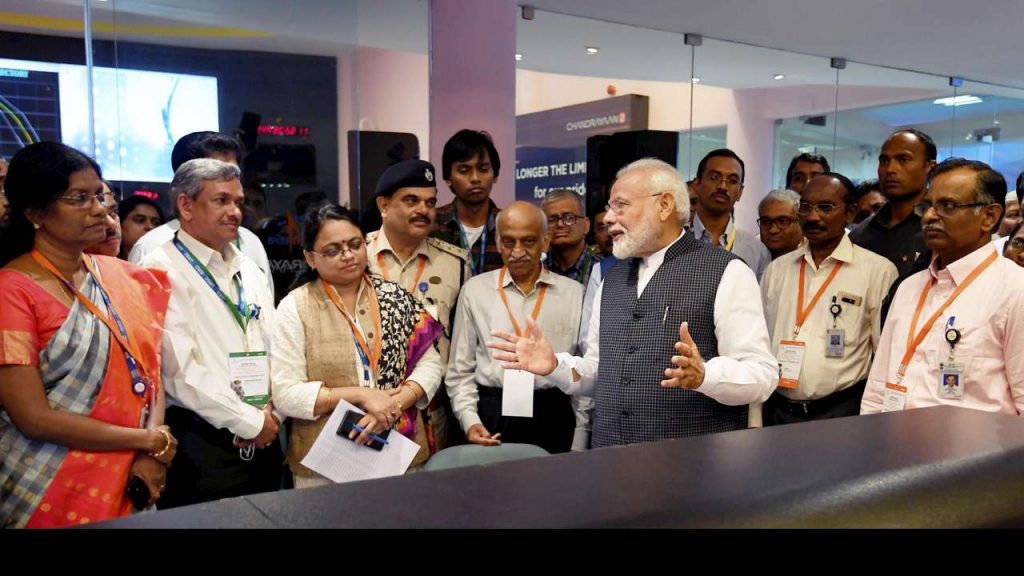 India’s space program started off both as an ambitious and bold venture for a young nation which had to rebuild its economy from scratch after having remained a colony for well over 200 years. Even after the dawn of Independence, the nation’s overall development remained embroiled in an unviable economic policy and unethical minority appeasement practices. Harsh ground realities like failed monsoons and periodical natural calamities worsened the situation. Pseudo-secularism gave rise to many a communal clash, which hindered a smooth social development.

Furthermore, our nation had to fight major wars and border skirmishes with its neighbours. Terrorist attacks across the country were the order of the day. Absence of muscular defence policy and aggressive foreign policy was the root cause of the wars and the internal disturbances. Failure to integrate the province of Jammu, Kashmir and Ladakh with the rest of the country in a smooth and seamless transition of power at the time of partition took its toll on the security situation in the entire region.

All of this had the combined effect of depleting the economy and sapping the morale of the nation. This deplorable situation could have been prevented if only we had a leadership with a vision at the Centre, unafraid of taking bold decisions in the interest of the nation. Instead, the leaders who assumed the reins of power in our country after Independence succumbed to the temptation of mooning over a romantic world view, which had no mooring in pragmatism or geopolitical tectonic shifts occurring from time to time.

It was only subsequent to the change of guard at the Centre in 2014 that the world witnessed the metamorphosis of a giant nation, which had hitherto been lying dormant, into a significant international powerhouse and a world leader. In fact, during the period 2004-2014, the government at the Centre was practically defunct, having been afflicted with policy paralysis, which led the nation to sink more and more into an abyss of uncertainty and despair.

In the scenario mentioned above, for a nascent Republic to embark on a space research program amid all the melee could have been considered audacious by the world at large. Yet the foundation of the program was laid in 1969 with the establishment of the Indian Space Research Organisation (ISRO) and the Department of Space in 1972. From the days of the launching of India’s first satellite in space by the erstwhile Soviet Union in 1975, our space program has come a long way.

Lately, launching of communication and earth monitoring satellites by ISRO is happening on a regular basis. India successfully conducted a path-breaking launching of 20 satellites in space by a single vehicle in 2016. Moreover, our nation created the world record of launching as many as 104 satellites in space via a single rocket in 2017. India also has many firsts to its credit in its space ventures. In 2014, it became the first nation to succeed in its maiden attempt to put an Orbiter mission in the Mars orbit, and ISRO was the first Asian space agency to do so.

India’s tryst with a landmark lunar Odyssey came by when ISRO launched Chandrayaan-1, its first lunar Orbiter in 2008, which performed a controlled crash impact with its Moon Impact Probe (MIP). The MIP performed remote sensing experiments during its descent to the lunar surface. The Orbiter discovered traces of water on the lunar surface in the form of ice. Chandrayaan-1 mission also performed several other tasks such as mapping and atmospheric profiling of the Moon.

ISRO successfully launched its second lunar mission in July 2019 when it put into the lunar orbit Chandrayan-2. Consisting of three major modules, Orbiter, Lander and Rover, the mission’s objective was to explore the Moon’s surface and distribution of lunar water. Although the Lander did land on the lunar surface in what turned out to be a hard landing, contact between the Lander and the Orbiter was lost. Thus the Lander and the Rover are lost for all practical purposes. However, the Orbiter is still functioning and is expected to continue to function for a year. Meanwhile, ISRO has declared Mission Chandrayaan-2, a 95% success.

With this, India scored yet another first in its space ventures, by having its lunar mission land, albeit hard, on the southern lunar pole. All the other countries (the USA as well as the erstwhile USSR and China), the lunar missions of which have carried out a successful landing, have done so in the northern lunar pole.

ISRO has currently under consideration its third lunar mission, Chandrayaan-3 for launch by 2024. This will be a joint India-Japan mission, aimed at exploration of the Moon’s polar regions for water. Water prospecting, sample collection and analysis, and sample return are its likely objectives.

India’s space program has indeed come of age. The young nation, which had embarked on an ambitious space program even as it was trying hard to come to grips with a flailing economy, has joined the club of veteran space research nations. It has been planning, among other missions, Gaganyaan, a crewed-orbital spacecraft to be launched into low earth orbit in December 2021 as part of the Indian human spaceflight program.

India’s space program is solely aimed at employing advanced technology and scientific innovations for the development of the nation as has been avowed by our political leaders and scientific community time and again. The idea behind the program is by no means to show off our might or to vie with the economically developed countries for recognition. As Prime Minister Narendra Modi has recently pointed out, the hard work, innovative ideas and determination of our scientific community, which made Chandrayaan-2 a success, constitute a harbinger for a better quality of life, better healthcare, and educational facilities for our people.

The biggest take-away of Chandrayaan-2 is the fillip it has afforded to our illustrious scientific community, which is tirelessly toiling to launch more missions to conquer the sky. With a supportive government and a proud nation behind it, India’s space research program is all set to score more accomplishments, open new frontiers and soar to new heights. The technological and industrial advancement that accompanies the scientific achievements is bound to bring in its wake substantive economic growth and the opening of new vistas in the fields of education and research.

The Moon is no more in the realm of imagination of the poets. It is much closer now than ever in the past, and is much more than a ball of cheese that keeps waning and waxing. Just as we are about to discover the dark side of the Moon, we shall be tapping the unexplored reserves of man’s potential to go where only thoughts and dreams have hitherto ventured. We are going to do it not because it is going to be easy but because we believe in ourselves and in our capability.