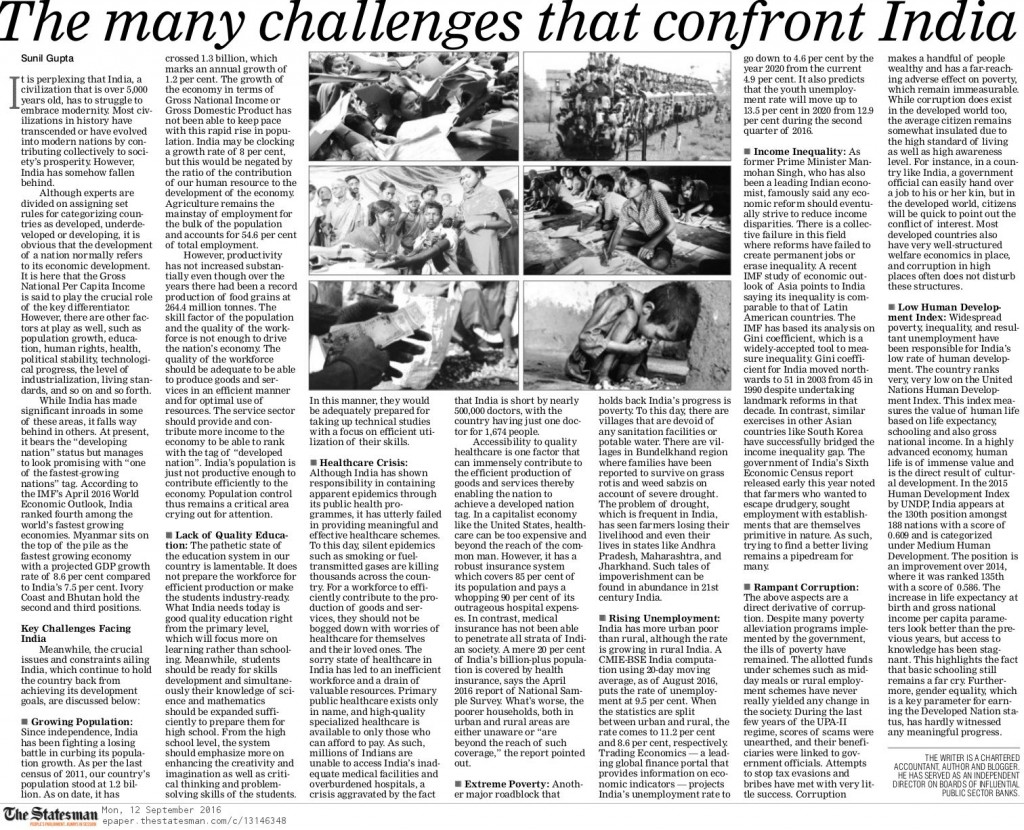 It is perplexing that India, a civilization that is over 5,000 years old, has to struggle to embrace modernity. Most civilizations in history have transcended or have evolved into a modern nation by contributing collectively to society’s prosperity. However, India has somehow fallen behind.

Although experts are divided on assigning set rules for categorizing countries as developed or underdeveloped or developing, it is obvious that the development of a nation normally refers to its economic development. It is here that the Gross National Per Capita Income is said to play the crucial role of the key differentiator. However, there are other factors at play as well, such as population growth, education, human rights, health, political stability, technological progress, the level of industrialization, living standards, and so on and so forth.

While India has made significant inroads in some of these factors, it falls way behind in others. At present, it bears the “developing nation” status but manages to look promising with “one of the fastest-growing nations” tag. According to the IMF’s April 2016 World Economic Outlook, India ranked fourth among the world’s fastest growing economies. Myanmar sits on the top of the pile as the fastest growing economy with a projected GDP growth rate of 8.6% compared to India’s 7.5%. Ivory Coast and Bhutan hold the second and third positions.

Meanwhile, the crucial issues and constraints ailing India, which continue to hold the country back from achieving its development goals, are discussed below:

Growing Population: Since independence, India has been fighting a losing battle in curbing its population growth. As per the last census of 2011, our country’s population stood at 1.2 billion. As on date, it has crossed 1.3 billion, which marks an annual growth of 1.2%. The growth of the economy in terms of Gross National Income or Gross Domestic Product has not been able to keep pace with this rapid rise in population. India may be clocking a growth rate of 8%, but this would be negated by the ratio of the contribution of our human resource to the development of the economy. Agriculture remains the mainstay of employment for the bulk of the population and accounts for 54.6% of total employment of the workforce.

However, productivity has not increased substantially even though over the years there had been a record production of food grains at 264.4 million tonnes. The skill factor of the population and the quality of the workforce is not enough to drive the nation’s economy. The quality of the workforce should be adequate to be able to produce goods and services in an efficient manner and for optimal use of resources. The service sector should provide and contribute more income to the economy to be able to rank with the tag of “developed nation”. India’s population is just not productive enough to contribute efficiently to the economy. Population control thus remains a critical area crying for attention.

Lack of Quality Education: The pathetic state of the education system in our country is lamentable. It does not prepare the workforce for efficient production or make the students industry-ready. What India needs today is good quality education right from the primary level, which will focus more on learning rather than schooling. Meanwhile, the students should be ready for skills development and simultaneously their knowledge of science and mathematics should be expanded sufficiently to prepare them for high school. From the high school level, the system should emphasize more on enhancing the creativity and imagination as well as critical thinking and problem-solving skills of the students. In this manner, they would be adequately prepared for taking up technical studies with a focus on efficient utilization of their skills.

Healthcare Crisis: Although India has shown responsibility in containing apparent epidemics through its public health programs, it has utterly failed in providing meaningful and effective healthcare schemes. To this day, silent epidemics such as smoking or fuel-transmitted gases are killing thousands across the country. For a workforce to efficiently contribute to the production of goods and services, they should not be bogged down with worries of healthcare for themselves and their loved ones. The sorry state of healthcare in India has led to an inefficient workforce and a drain of valuable resources. Primary public healthcare exists only in name, and high-quality specialized healthcare is available to only those who can afford to pay. As such, millions of Indians are unable to access India’s inadequate medical facilities and overburdened hospitals, a crisis aggravated by the fact that India is short by nearly 500,000 doctors, with the country having just one doctor for 1,674 people.

Accessibility to quality healthcare is one factor that can immensely contribute to the efficient production of goods and services thereby enabling the nation to achieve a developed nation tag. In a capitalist economy like the United States, healthcare can be too expensive and beyond the reach of the common man. However, it has a robust insurance system which covers 85% of its population and pays a whopping 90% of its outrageous hospital expenses. In contrast, medical insurance has not been able to penetrate all strata of Indian society. A mere 20% of India’s billion-plus population is covered by health insurance, says the April 2016 report of National Sample Survey. What’s worse, the poorer households, both in urban and rural areas are either unaware or “are beyond the reach of such coverage,” the report pointed out.

Extreme Poverty: Another major roadblock that holds back India’s progress is poverty. To this day, there are villages that are devoid of any sanitation facilities or potable water. There are villages in Bundelkhand region where families have been reported to survive on grass rotis and weed sabzis on account of severe drought. The problem of drought, which is a frequent recurrence in India, has seen farmers losing their livelihood and even their lives in states like Andhra Pradesh, Maharashtra, and Jharkhand. Such tales of impoverishment can be found in abundance in the 21st Century India.

Rising Unemployment: India has more urban poor than rural, although the rate is growing in rural India. A CMIE-BSE India computation using 20-day moving average, as of August 2016, puts the rate of unemployment at 9.5%. When the statistics are split between urban and rural, the rate comes to 11.2% and 8.6%, respectively. Trading Economics — a leading global finance portal that provides information on economic indicators — projects India’s unemployment rate to go down to 4.6% by the year 2020 from the current 4.9%. It also predicts that the youth unemployment rate will move up to 13.5% in 2020 from 12.9% during the second quarter of 2016.

Income Inequality: As former Prime Minister Manmohan Singh, who has also been a leading Indian economist, famously said any economic reform should eventually strive to reduce income disparities. There is a collective failure in this field where reforms have failed to create permanent jobs or erase inequality. A recent IMF study of economic outlook of Asia points out at India saying its inequality is comparable to that of Latin American countries. The IMF has based its analysis on Gini coefficient, which is a widely-accepted tool to measure inequality. Gini coefficient for India moved northwards to 51 in 2003 from 45 in 1990 despite undertaking landmarks reforms in that decade. In contrast, similar exercises in other Asian countries like South Korea have successfully bridged the income inequality gap. The government of India’s Sixth Economic Census report released early this year noted that farmers who wanted to escape drudgery, sought employment with establishments who are themselves primitive in nature. As such, trying to find a better living remains a pipedream for many.

Rampant Corruption: The above aspects are a direct derivative of corruption. Despite many poverty alleviation programs implemented by the government, the ills of poverty have remained. The allotted funds under schemes such as midday meals or rural employment schemes have never really yielded any change in the society. During the last few years of the UPA-II regime, scores of scams were unearthed, and their beneficiaries were linked to government officials. Attempts to stop tax evasions and bribes have met with very little success. Corruption makes a handful of people wealthy and has a far-reaching adverse effect on poverty, which remain immeasurable. While corruption does exist in the developed world too, the average citizen remains somewhat insulated due to the high standard of living as well as high awareness level. For instance, in a country like India, a government official can easily hand over a job to his or her kin, but in a developed world, citizens will be quick to point out the conflict of interest clause. Most developed countries also have a very well-structured welfare economics in place, and corruptions in high places often do not disturb these structures.

Low Human Development Index: Widespread poverty, inequality, and resultant unemployment have been responsible for India’s low rate of human development. The country ranks very, very low on the United Nations Human Development Index. This index measures the value of human life based on life expectancy, schooling and also gross national income. In a highly advanced economy, human life is of immense value and is the direct result of cultural development. In the 2015 Human Development Index by UNDP, India appears at the 130th position amongst 188 nations with a score of 0.609 and is categorized under Medium Human Development. The position is an improvement over 2014, where it was ranked 135th with a score of 0.586. The increase in life expectancy at birth and gross national income per capita parameters look better than the previous years, but access to knowledge has been stagnant. This highlights the fact that basic schooling still remains a far cry. Furthermore, gender equality, which is a key parameter for earning the Developed Nation status, has hardly witnessed any meaningful progress.

142 thoughts on “The many Challenges that confront India”