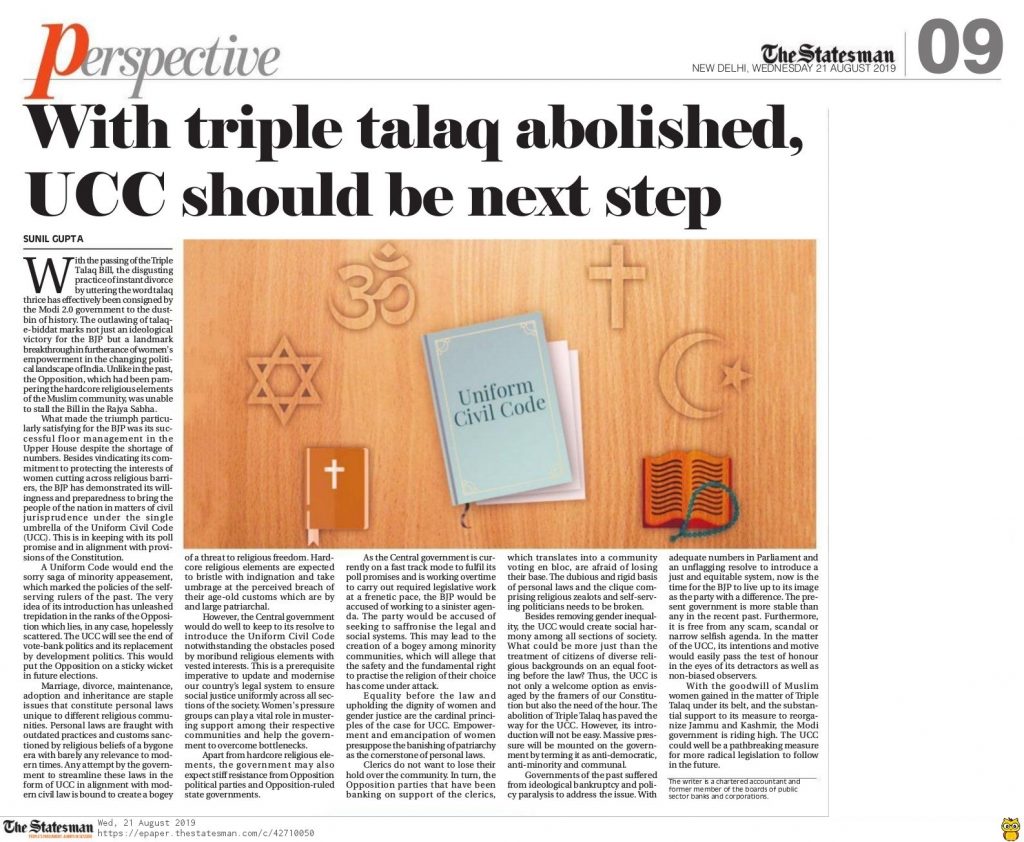 With the passing of the Triple Talaq Bill, the disgusting practice of instant divorce by uttering the word talaq thrice has effectively been consigned by the Modi 2.0 government to the dustbin of history. The outlawing of talaqe-biddat marks not just an ideological victory for the BJP but a landmark breakthrough in furtherance of women’s empowerment in the changing political landscape of India. Unlike in the past,the Opposition, which had been pampering the hardcore religious elements of the Muslim community, was unable to stall the Bill in the Rajya Sabha.

What made the triumph particularly satisfying for the BJP was its successful floor management in the Upper House despite the shortage of numbers. Besides vindicating its commitment to protecting the interests of women cutting across religious barriers,the BJP has demonstrated its willingness and preparedness to bring the people of the nation in matters of civil jurisprudence under the single umbrella of the Uniform Civil Code(UCC). This is in keeping with its poll promise and in alignment with provisions of the Constitution.

A Uniform Code would end the sorry saga of minority appeasement,which marked the policies of the self serving rulers of the past. The very idea of its introduction has unleashedtrepidation in the ranks of the Opposition which lies, in any case, hopelessly scattered. The UCC will see the end of vote-bank politics and its replacement by development politics. This would put the Opposition on a sticky wicket in future elections.

Marriage, divorce, maintenance,adoption and inheritance are staple issues that constitute personal laws unique to different religious communities.Personal laws are fraught withoutdated practices and customs sanctioned by religious beliefs of a bygoneera with barely any relevance to modern times. Any attempt by the government to streamline these laws in the form of UCC in alignment with modern civil law is bound to create a bogey of a threat to religious freedom. Hardcore religious elements are expected to bristle with indignation and take umbrage at the perceived breach of their age-old customs which are by and large patriarchal.

However, the Central government would do well to keep to its resolve to introduce the Uniform Civil Code not with standing the obstacles posed by moribund religious elements with vested interests. This is a prerequisite imperative to update and modernize our country’s legal system to ensure social justice uniformly across all sections of the society. Women’s pressure groups can play a vital role in mustering support among their respective communities and help the government to overcome bottlenecks.

As the Central government is currently on a fast track mode to fulfil its poll promises and is working overtime to carry out required legislative work at a frenetic pace, the BJP would beaccused of working to a sinister agenda.The party would be accused of seeking to saffronise the legal and social systems. This may lead to the creation of a bogey among minority communities, which will allege that the safety and the fundamental right to practise the religion of their choice has come under attack.

Equality before the law and up holding the dignity of women and gender justice are the cardinal principles of the case for UCC. Empowerment and emancipation of women presuppose the banishing of patriarchyas the cornerstone of personal laws.

Clerics do not want to lose their hold over the community. In turn, the Opposition parties that have been banking on support of the clerics,which translates into a community voting en bloc, are afraid of losing their base. The dubious and rigid basis of personal laws and the clique comprising religious zealots and self-serving politicians needs to be broken.

Besides removing gender inequality,the UCC would create social harmony among all sections of society.What could be more just than the treatment of citizens of diverse religious backgrounds on an equal footing before the law? Thus, the UCC is not only a welcome option as envisaged by the framers of our Constitution but also the need of the hour. The abolition of Triple Talaq has paved the way for the UCC. However, its introduction will not be easy. Massive pressure will be mounted on the government by terming it as anti-democratic,anti-minority and communal.

Governments of the past suffered from ideological bankruptcy and policy paralysis to address the issue. With adequate numbers in Parliament and an unflagging resolve to introduce a just and equitable system, now is the time for the BJP to live up to its image as the party with a difference. The present government is more stable than any in the recent past. Furthermore,it is free from any scam, scandal or narrow selfish agenda. In the matter of the UCC, its intentions and motive would easily pass the test of honour in the eyes of its detractors as well as non-biased observers.

With the goodwill of Muslim women gained in the matter of Triple Talaq under its belt, and the substantial support to its measure to reorganize Jammu and Kashmir, the Modi government is riding high. The UCC could well be a path breaking measure for more radical legislation to follow in the future.

(The article “With Triple Talaq Abolished, UCC Should be Next Step”  published in daily newspaper “The Statesman” on 21 August, 2019)

72 thoughts on “With Triple Talaq Abolished, UCC Should be Next Step”